Physiology of the lemon

Home / Physiology of the lemon

The eatable pulp (endocarp) is contained in a peel (epicarp or exocarp) which is quite thick and not eatable in the strict sense (because it doesn’t have a good taste, except in the kumquat).

The epicarp (peel) consists of an epidermis made of a variable (depending on the variety, the climatic conditions and the ripening) quantity of epicuticolar waxes that have the shape of little plates. In this first epidermic layer usually a microflora lives, predominantly consisting of fungi and bacteria, more abundant in damp climates. Because of this, before the process of extraction of the juice and of the essential oils, an adequate washing of the fruit is always necessary to eliminate possible contaminations coming from the surface of the fruit. To do that, we use washing-brushing machines with a leaking water system or a detergent or disinfectant solution (usually chlorine at 25 ppm).
Beneath the first epidermis there is the peripheral part of the peel called flavedo. 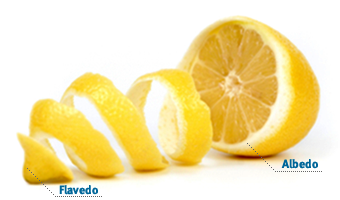 The flavedo is yellow, green or orange and consists of few layers of cells that become bigger and bigger outwards. In the flavedo there are many multi-cellular bodies full of specific essential oils with a shape that goes from globular to pyriform. These are the so-called oleiferous bladders, that have very thin and fragile walls; there the essential oil is contained with a positive pressure: this permits the recovery through abrasion of the layer of the flavedo. When the fruit is fully ripen, the cells of the flavedo contain carotenoids (for the most part xanthophylls), that are set in chromoplastids (developed chromoplasts that, in a previous phase, contained chlorophyll).
The internal part of the peel is called pith.

The pith or mesocarp, white and spongy, consists of layers of tubular structured cells (and, anyway, more rough and less dense) that, near the endocarp, form a less thick cellular tissue with irregular-shaped intercellular spaces. The pith contains most of the vascular reticulum that provides the fruit water and nutriment. The thickness of the pith varies according to the type of citrus fruit and the cultivar. Because of this, it is necessary to regulate the extractors, in order to counterbalance the thickness of the layer of the pith, above all when the best quality is required. In fact the pith is rich in flavonoids which, if preserved in the juice, would make it very bitter.
Physiology of the lemon

The endocarp (the eatable pulp) is divided into segments in a radial disposition; each one is originated by an embryonic leaf and each segment is covered by a membrane that contains big, club-shaped multi-cellular bladders: these contain lemon juice. As there are no vascular connections in these bladders, they are believed to absorb water and nutriment through diffusion through the peduncle tissues. Close to the central axis of the fruit, along the edge of each segment, traces of the ovules and, sometimes, one or more pips are visible. The axis of the fruit also contains vascular bands in a radial disposition, which connect with the vascular elements of the peel in both poles. The inside of the fruit (core) consists of a spongy tissue similar to that of the pith.